Group CEO and Chairman of the Executive Committee

Mr. Karim Awad is Group Chief Executive Officer, Chairman of the Executive Committee, ​and a member of the board of EFG Hermes Holding. Since assuming leadership of the firm in 2013, Mr. Awad has led EFG Hermes’ return to profitability by cutting unwarranted expenses, selling non-core assets and distributing excess cash to shareholders. Starting 2014, Mr. Awad worked with top-tier professionals across the Firm’s different divisions in building a comprehensive regional advisory pipeline; extending its leadership as the Arab world’s largest securities brokerage; continuing to lead its peers in like-for-like rankings as an asset manager; successfully refocusing the private equity business; and continuing to provide the region’s highest-quality research offering.

By the beginning of 2016, Mr. Awad also drove the company into a new strategic shift based on an extended geographic presence that aims to transform EFG Hermes from a MENA house into a finance house that has reach across frontier markets.  He also initiated an increased emphasis on product diversification in the Firm’s traditional business lines as well as through the creation of a parallel non-bank finance platform, EFG Hermes Finance — a platform that was formed in 2015 and currently encompasses leasing, microfinance, consumer finance, and factoring businesses.

Mr. Awad has a long track record advising major corporations on equity offerings and M&A transactions and was instrumental in the development of EFG Hermes’s debt advisory practice. During his tenure in the Investment Banking Division, he led and closed transactions with an aggregate value of more than USD 40 billion.

Co-CEO of the Investment Bank

A 20-year veteran with EFG Hermes, Mr. Mohamed Ebeid is currently the Co-CEO of the Investment Bank, a position he took in 2016 with a mandate to grow the business on the sell side and to expand its product offering. Since then, he has successfully built out the Firm’s Frontier Business with on-the-ground operations in four different continents, giving clients access to more than 75 markets around the world. He has also led the development of the Firm’s structured products platform, which has pulled in trades worth c. USD2 billion in its first two years of inception, and on the creation of the Fixed-Income business, which began operations in 2018.

Mr. Ebeid began his career with the firm in 1999 in the Brokerage division as part of the High-Net-Worth team and has since held numerous positions within the Firm, the most recent prior to his current post being Co-Head of Brokerage where he managed over just two years to restructure the business and streamline its activities all white boosting profitability. He held the post of Head of Institutional Sales beginning 2006 where he managed to add GCC intuitional clients and sovereign wealth funds to the Firm’s client base. He led the team on every single ECM transaction that had taken place under his tenure, raising more than USD20 billion in ECM transactions across jurisdictions. Mr. Ebeid was also an integral part of EFG Hermes’s Institutional Desk, to head an endeavor to expand the Firm’s Western institutional client base and further root the business in its home market of Egypt. During that time, he was part of the team executing the Firm’s expansion plan in the MENA region and directing its capabilities in terms of research and corporate access to Western institutional clients so as to execute on-the-ground and offshore trades through the Firm’s brokerage network. 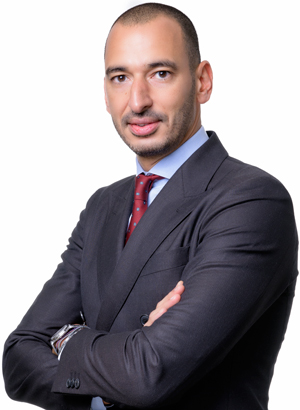 Co-CEO of the Investment Bank

Mr. Karim Moussa joined EFG Hermes in 2008, with the primary responsibility of building the Group’s infrastructure private equity platform. During this time, he also closed several flagship deals, such as the Nasdaq- Dubai’s USD 445 million take-private of DAMAS International and its subsequent exit, delivering c. 2x cash-on-cash returns and the USD 208 million acquisition of 49% of EDPR France.

Mr. Moussa is currently the head of both Private Equity and Asset Management Divisions, as well as an investment committee member of several EFG Hermes-sponsored funds, including the InfraMed Infrastructure Fund with combined AUMs of c. USD 1 billion. He is also a member of the boards of various portfolio companies.

Prior to joining EFG Hermes, Mr. Moussa was a Vice President at Deutsche Bank’s Global Banking division, with responsibilities for M&A, ECM and DCM advisory in the MENA region. In that role, he advised on the USD 4.2 billion Dubai Ports World IPO, the USD 670 million sale of Sokhna Port to Dubai Ports World, and the USD 1.4 billion LBO of the Egyptian Fertilizers Company by Abraaj Capital. He joined Deutsche Bank in 2001 as an Analyst in the M&A execution team in Frankfurt, advising on several mid-cap transactions in Continental Europe. 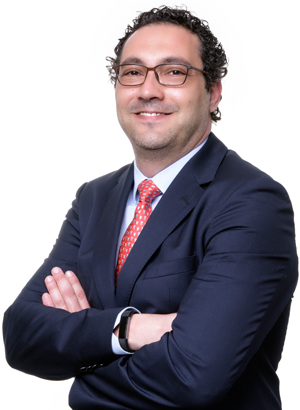 Mr. Mohamed El Wakeel is Chief Operating Officer at EFG Hermes. Following three years at HSBC, Mr. El Wakeel joined the Firm in 2000 as part of the operations team of the Financial Brokerage Group (FBG). Through his efforts in streamlining the brokerage division’s back-office operations to ensure best in class practices, he has since moved up the ranks, first heading brokerage operations for Egypt then becoming the Securities Brokerage Group Head of Operations. In his new role, Mr. El Wakeel played a pivotal role in setting up, followed by integrating operations the Firm’s newly launched offices in new markets.

Prior to becoming COO, he was Group Head of EFG Hermes Market Operations, where his hands-on experience has been key to the enhancement of the Firm’s brokerage operations across multiple lines of business, such as the development and streamlining of the Asset Management division’s operations. 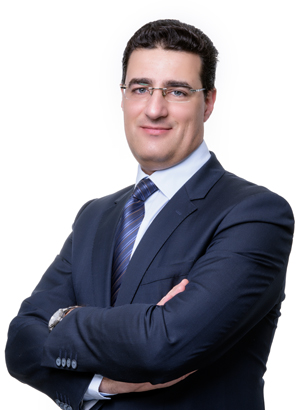 Mr. Abdel Wahab Mohamed Gadayel is EFG Hermes Holding’s Group Head of Risk and Compliance, a post he has held since 2013. Prior to his current role, he served as Group Head of Compliance for three years, where he played a key role in initiating and evolving the Group’s policies and business procedures in addition to issuing periodic risk and compliance reports covering the Group’s entire array of operations.

Mr. Gadayel joined EFG Hermes in 1998 and served as the Deputy Head of Operations in EFG Hermes’ subsidiary, Financial Brokerage Group, until 2004. He also worked on integrating newly-acquired offices in the lower GCC region as the Group rapidly expanded into new markets during his tenure as Managing Director of Operations at EFG Hermes UAE between 2004 and 2009.

Mr. Gadayel is a Cairo University graduate, where he majored in Economics and minored in Political Science. 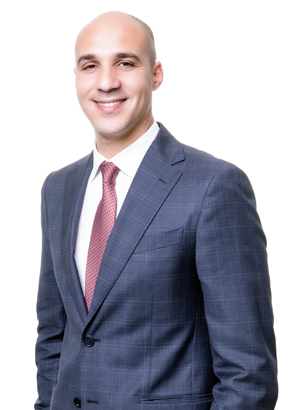 Mr. Mohamed Abdel Khabir is EFG Hermes’ Chief Financial Officer. Prior to his current post, Mr. Abdel Khabir joined EFG Hermes’ Investment Banking division in early 2008 and remained in this division until March 2016 as a Director.

Previously, he held the position of Financial Planning Manager at Procter and Gamble in the Corporate Finance divisions with a focus on financial planning, budgeting, corporate restructure, integration and profit forecasting.

Mr. Abdel Khabir’s notable transactions during his investment banking tenure include the IPO of Integrated Diagnostics Holding (IDH) through a secondary offering worth USD 334 million in the London Stock Exchange (LSE). He was also involved in the sale of a leading hospital in Egypt to the Abraaj Group, the merger of Al Borg and Al Mokhtabar laboratories, ENPC’s USD 1.05 billion Syndicated Loan and the issuance of ODH EDRs worth USD 1.8 billion.

Mr. Abdel Khabir holds a BA in Business Administration from the American University in Cairo with a concentration in Finance where he graduated with high honors and is a CFA charter-holder. 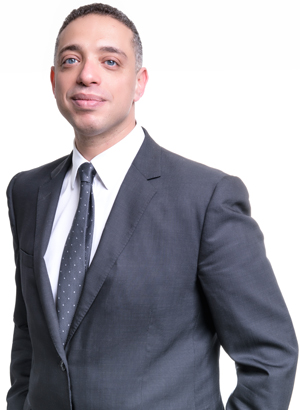 Prior to joining EFG Hermes in 2016, Mr. Hassouna was General Manager and Head of Structured Finance and Investment Banking at Bank Audi, where he closed structured and project finance transactions in excess of USD 15 billion over an 18-year banking career that began at Misr International Bank. He also structured and executed several award-winning deals in project finance and M&A within Egypt and GCC, in addition to several other investment banking transactions. He has also served as the Head of Structured Finance and Syndication in Banque Misr where he successfully managed to top the league table of the MENA region in syndicated loans.

Mr. Hassouna is a Cairo-University B.B.A holder, where he graduated with highest honors. He also holds an MBA from J. Mack Robinson College of Business, Georgia State University as well as Islamic Finance Qualification from CISI- UK. 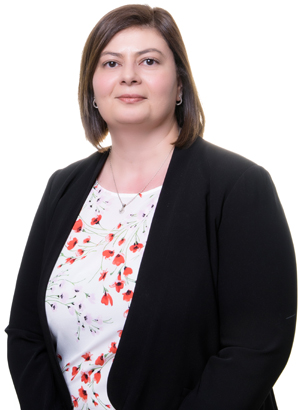 Ms. Inji Abdoun joined Human Resources at EFG Hermes in June 2007 as HR Manager for the UAE with a mandate to establish HR for the operation, while contributing to the department’s Group-wide initiatives with a focus on talent management. Her mandate saw an expansion in early 2008 as she took on an active role in the integration of the then-newly acquired Oman operation, as well as the enhancement of the HR offering in the KSA operation and later the integration of the Kuwait operation.

As of 2009 Ms. Abdoun is the Group Head of Human Resources overseeing the full spectrum of the department’s functions across the group while working closely with the Firm’s management team providing HR insight to business issues.

Prior to joining EFG Hermes, Ms. Abdoun assumed HR management roles at LINKdotNET (OT subsidiary), Fayrouz International (Heineken subsidiary), as well as a role in career advising and placement at the Career Advising & Placement Office (CAPS) of the American University in Cairo, accumulating more than 18 years of experience in the field. She is a SHRM Senior Certified Professional and a certified Myers‐Briggs practitioner.

Login to EFG Hermes 2018 Annual Report
Reset Password
Enter the username or e-mail you used in your profile. A password reset link will be sent to you by email.
We use cookies to collect information about how you use our website. We use this information to make our website work and enhance our services.

This website uses cookies to make the site work, to understand if the site is working well, how it is being used, to connect to social media sites (such as Facebook and Twitter) and to collect information useful to allow us and our partners to provide you with more relevant ads . Some cookies are essential to make the site work, but you can control how we use non-essential cookies at any time by clicking the “ON/OFF” button next to each category. For more information about the cookies used on this site, see  privacy & cookies policy
Necessary Always Enabled

Any cookies that may not be particularly necessary for the website to function and is used specifically to collect user personal data via analytics, ads, other embedded contents are termed as non-necessary cookies. It is mandatory to procure user consent prior to running these cookies on your website.